You might have heard or read about the famously Insta-worthy Museum of Ice Cream (MOIC) making its way to our shores from New York in the second half of the year, which Singapore Tourism Board announced last month at the annual industry conference on 7 April.

Recently, it’s been revealed that MOIC will officially open its doors at Dempsey this August where 14 never-before-seen installations dedicated to the celebration and experience of enjoying ice cream – including a Singapore-inspired “Dragon Playground”, a pink-and-yellow jungle with 10,000 bananas, and the largest MOIC sprinkle pool – will be featured at the 60,000-square-foot exhibition. On top of that, there’ll be an unlimited serving of five unique sweet treats throughout the self-guided experience that lasts between 60 and 90 minutes.

In anticipation of the official opening, MOIC has recently partnered up with Design Orchard to give us a little taste of the experiential exhibition and AVENUE ONE visited the space to share with you a first look at the all-pink retail showcase that’s going to be open until 27 May 2021. 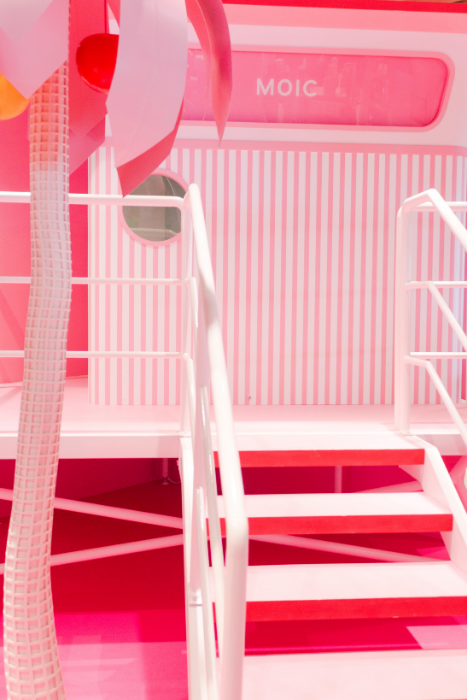 Located right in the heart of Singapore’s retail paradise at an integrated retail space for homegrown brands, the interactive and experiential retail showcase is free for all guests to experience and features limited-edition MOIC-themed products created in collaboration with Kydra, The Ice Cream & Cookie Co., Artisan of Sense, and Brewlander.

Decorated with signature waffle-cone palm trees with bubblegum pink fronds, the pop-up is led by well-trained #TeamMOIC performers (there will also be similar performers at the official exhibition to guide you during your walkthrough) who are more than happy to show you around and double as your photographer at the iconic Lifeguard Hut where photo opportunities are aplenty. Not only that, the Lifeguard Hut – which is one of the 14 installations that will be at the Dempsey space – holds a special surprise where you can expect to be captivated by a remarkable miniature sand sculpture resembling a tropical beach through a peephole.

You can also look forward to social media contests and giveaways, and be transported to a pink oasis while working up a sweat from one-hour yoga sessions hosted by ClassPass at Design Orchard’s rooftop under a canopy of pink palm trees.

Each session (priced at 10 ClassPass credits) will have a sweet ending with a complimentary refreshment of either a scoop of ice cream or a refreshing can of beer. You can book your spot on the Classpass website or mobile app.

The yoga session is available at the following timings: 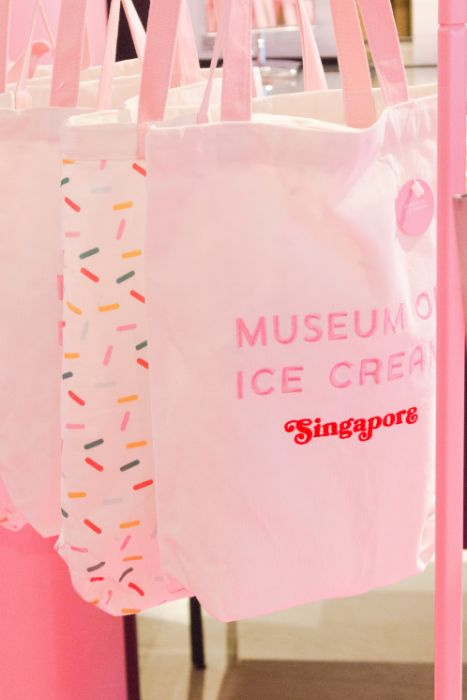 As for the exclusive memorabilia that are up for grabs at the MOIC pop-up, we can guarantee that you would want to take everything home because they are all just so attractive!

One of them is the Singapore-exclusive reversible tote which has only 1,000 units available – #TeamMOIC revealed to AVENUE ONE exclusively that the tote bag (S$30) has been flying off the shelves ever since its opening on 27 April and will not be restocked at the actual exhibition if it’s sold out at the retail showcase. You can adorn your reversible tote with the really cute unicorn pom-pom keychain (S$16) or the Merlion ice cream cone (a.k.a. Mercone) lapel pin (S$12.90). In addition to the reversible tote and accessories, there are also plenty of U.S. bestsellers you can score such as the multi-coloured sketchbook (S$18) and unicorn squishy stress ball (S$7). You can also snag the instantly recognisable MOIC cap (S$28) which comes in two options – the signature and the Mercone which is an edition exclusive to Singapore. We highly recommend you take home one – or both – of the plush toys (S$38) which come in two designs: unicorn and piñata. Just look at the picture and tell us how could you possibly resist bringing home these adorable plushies with you? Along with the exclusive merchandise, you can also bring home specially-designed products at the pop-up. There’s a range of uniquely pink MOIC activewear (S$39 – S$85) developed by Kydra, which we think you’ll look super chic in when you attend the yoga class led by ClassPass. There’s also a 100% pure soy wax candle by Artisan of Sense (S$33) up for grabs, which comes with fun stickers that you can decorate your citrus grapefruit-scented candle with. Want some refreshment after a hot day out shopping at Orchard? Pop by for unique, locally-inspired ice cream (S$6 per cup) by The Ice Cream & Cookie Co. which has three flavours for you to choose from: Lychee Bandung, Malty Boba, and Taro Milk Tea.

Or, grab a can of fruity and refreshing pink guava-and-raspberry-flavoured MOIC craft beer (S$7.90 per can) brewed locally by Brewlander. The beer can could definitely be a keepsake with its pink design and endearing Singapore icons like ice cream sandwiches and Mercone.

More details about the Museum of Ice Cream in Singapore

Slated to open mid-August until September 2021, the official Museum of Ice Cream in Singapore will be located at 100 Loewen Road, Singapore 248837 and will be opened from 10am to 11pm daily (closed on Tuesdays).

Tickets are priced from S$38 onwards. As of now, tickets for the opening month of August that come with exclusive perks have been fully snapped up. Online reservations for timeslots in September are now open. Click here to reserve your tickets or to get more information about the actual exhibition.

Meanwhile, the MOIC retail showcase is available for a limited time only from now to 27 May 2021 and can be found at Design Orchard, 250 Orchard Road, Singapore 238905. Admission is free.

All images by AVENUE ONE Magazine.

You may also be interested in: Fun activities and ideas on how to spend your SRV this May